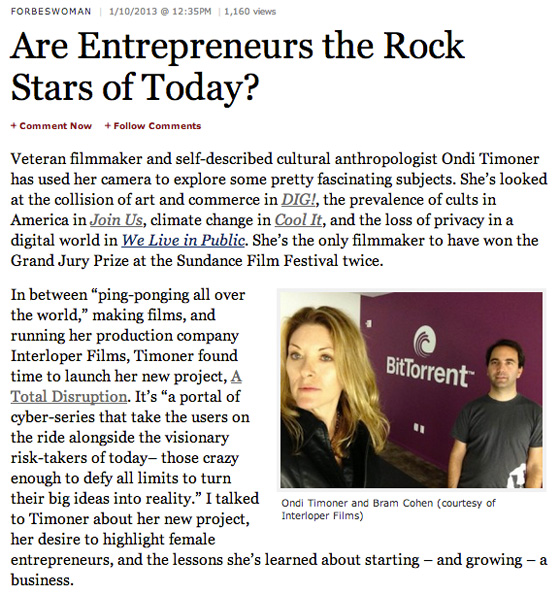 “Veteran filmmaker and self-described cultural anthropologist Ondi Timoner has used her camera to explore some pretty fascinating subjects. She’s looked at the collision of art and commerce in DIG!, the prevalence of cults in America in Join Us, climate change in Cool It, and the loss of privacy in a digital world in We Live in Public. She’s the only filmmaker to have won the Grand Jury Prize at the Sundance Film Festival twice.”

“In between ‘ping-ponging all over the world,’ making films, and running her production company Interloper Films, Timoner found time to launch her new project, A Total Disruption. It’s ‘a portal of cyber-series that take the users on the ride alongside the visionary risk-takers of today– those crazy enough to defy all limits to turn their big ideas into reality.’ I talked to Timoner about her new project, her desire to highlight female entrepreneurs, and the lessons she’s learned about starting – and growing – a business.”

Nice write up! Thanks Upstart, for your coverage of A TOTAL DISRUPTION. Go Earbits, go!

A Total Disruption was recently featured in the LA Weekly.

Reddit Video featured on The Next Web | A Total Disruption